The idea of a Celtic Crossing, that is a bridge connecting the islands of Great Britain and Ireland, is about as old as the United Kingdom of Great Britain and Northern Ireland itself.  And like any major infrastructural undertaking has been fraught with much political debate.  Projects such as these are inherently political footballs because it is ultimately the public who pays for them and they are usually quite expensive.

Still, to be fair, it isn’t entirely the cost that is in question here.  How do you tackle such a thing?  Where do you put it?  Is it even feasible?  Let’s take a look.

If you were to visit either island today there would be two choices for crossing the Irish Sea.  Ferry or airplane.  Regular ferry service connecting Holyhead in Wales with Dublin in Ireland can take anywhere from about 2 hours to over 3 hours, depending on the company you decide to sail with, to make the 73 mile crossing.  Commercial flights are also readily available between the two islands as an option if you enjoy long lines, security screenings and squeezing all of your carry on liquids into a ridiculously sized plastic baggie.

If you were to drive your car over 73 miles, assuming a standard 60 miles an hour, the crossing could be made in just over an hour.  That’s a huge improvement for you and me from a convenience standpoint but what about trade?  Goods could reach their destination on either side of the crossing in much less time and probably at a lower cost.  There would likely be a toll on any bridge crossing, but it would probably be cheaper than a ferry fare.

So I think we are all decided that this is a good idea.  Great, now let’s decide on where to put it.  There are really only two likely spots for a bridge crossing.  Others have been mentioned, like a south Irish sea crossing and a tunnel from Liverpool to Belfast via the Isle of Man, but for the purposes of this article, we’re only going to talk about the most likely two.

Ballycastle, Northern Ireland to Kintyre, UK.  This is the shortest route at about 19 miles (with modifications by me) and by all accounts the obvious choice.  Or is it?  The remoteness of Kintyre makes this less than desirable.  It is 3 hours up and around Loch Fyne via a treacherous mountain pass to Glasgow, the nearest big city.  There are two ferry crossings which shorten the route which could also be bridged (Talbert-Portavadie, Hunter’s Quay-McInroy’s Point).  Or, you could just bridge from the Mull of Kintyre to the Isle of Bute, then across the Firth of Clyde to the vicinity of West Kilbride.  Heck, take a page out of Norway’s book, Scotland, and start building some bridges!

Bangor, Northern Ireland to Portpatrick, UK.  This is the most commonly championed route for a bridge (again, with slight modifications by me), mainly because it directly services Belfast and more centrally connects the north of England and the south of Scotland, not to mention it more easily connects to rail services at Stranraer.  This option would require less development than the shorter route to the north, yet is only a mere 4 miles longer.  Sounds like a winner.

The North Channel is home to Beaufort’s Dyke, a trench some 30 miles long and up to 1,000 feet deep in places.  Outside of this, sea depths plunge pretty quickly once you leave shore to an average of about 400 feet.  According to navigation charts, the bottom is sandy with some pebbles.  There may be bedrock below this layer of sand.  At any rate, with these depths any foundation attempted would not only be tricky they would also be expensive.

A floating bridge could be worth considering, especially given the water depths.  Tides in the Belfast area would probably be in the 10+ feet range, comparable to the Hood Canal Bridge.  But even with these kinds of tides, due to the width of the channel, currents may not be as critical as they are at Hood Canal.  A climatology study would be needed to determine the appropriate wind and wave forces for design, but these should not be an obstacle.

In lieu of an opening draw span, which would be maintenance intensive and require constant staffing to operate, a large navigation channel could be utilized on the Belfast side to accommodate vessel traffic.  This also has the benefit on not inconveniencing traffic during a bridge opening.  Another alternative would be a submerged tube which would sit below the surface, deep enough to not hinder vessels.

To appease those of an environmental persuasion, a discrete pontoon bridge could be used to allow water to flow through the channel.  Fish and other wildlife would be less impacted by such a bridge, and the forces of current and waves would likely be less.

Sea depths are less than in the fjords of Norway, so more conventional anchor cables may be used to hold the bridge in place, rather than a curved, end anchored bridge.  The beauty of a floating bridge is its limitless potential.  Buoyancy supports the vertical loads, much like a slab on grade.  Laterally, the bridge is a continuous beam on an elastic foundation.  Loads too big?  Add more anchor cables!

Everything I’ve read about such a bridge has mentioned it carrying some form of rail.  Rail gauges are different between the two islands, but putting that aside for a moment, consideration must be made for trains crossing a floating bridge.  Floating bridges move, they yaw, they pitch, they roll, they expand and contract.

These movements are usually accommodated by large swivel modular joint systems.  Think of strip seals, only stacked in a line.  Each strip seal joint is capable of three inches of movement, and the more you add, the more movement the joint can take.  The swivel action of such a joint allows the bridge to articulate under lateral loading.  Rubber tires, not being confined to a rail, can negotiate changing geometry of a modular joint.

But what about a wheel that is on a rail?  Any movement of the joint would cause a misalignment of the rail and derail the train.  Enter the track bridge.  This complex assembly, the first such example will be fitted to the Homer M. Hadley Memorial Bridge in Seattle, maintains rail alignment while allowing the bridge to move.  A novel solution to a complicated problem.

So what would this cost?  A 2010 report gave a cost of £20.5 billion for a bridge across the North Channel of the Irish Sea.  Assuming a 4 lane highway with a 10 foot shared use path (based on US highway standards) and two rail lines, we’re probably looking at a 100 foot wide bridge.  At 23 miles long and assuming $1,000 a square foot, you’re up around $12.1 billion (£9.2 billion if you’re reading this in the UK).  That’s almost half the proposed cost of the British Government’s figure!  Queue ‘Rule Britannia.’ 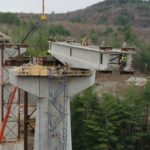 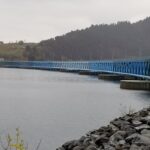