The concept of a bridge that floats on water instead of being supported by the ground beneath is not new.  Nearly 2000 years ago the Chinese were using them to wage war.  Pontoons were used to cross the Bosporus in the 7th century.  Even Napoleon used them, his engineer’s building four bridges across the Dnieper in a single night during the Battle of Smolensk in 1812.  Indeed, a quick look at the history of the floating bridge will tell you that they were the bridge of choice of armies across the globe.

But for some strange reason the floating bridge has not been a big hit with civil engineers.  Like the zeppelin, another invention with its genesis in war, the floating bridge has become a niche type structure.  Perhaps it is the similarity in the science behind the two devices that seem to daunt some engineers?  Both the zeppelin and a floating bridge rely on buoyancy for their very nature, that invisible force that counters the other invisible force called gravity.  Is there some inherent mistrust of things we cannot see?

Zeppelins lost favor after the Hindenburg disaster of 1937.  Airplanes moved faster and apparently people found comfort in generating lift by creating a pressure difference across an air foil as opposed to creating it by displacing a fluid.  For bridges, advances in materials mean we can span further by counteracting gravity without the assistance of displaced fluid.

While Homer Hadley may not have been the floating bridge’s inventor, his solution for crossing Lake Washington in the 1930’s took an old concept and gave it new life.  He also gave it an unheard of scale.  For the last 80 years, Washington State has been home to the top three longest floating bridges in the world and in the first 20 of those we broke our own world record.  When Demerara Harbour was built in 1978, fourth longest, it was half a kilometer shorter than the longest in the world.  It may also interest the reader to know that there are 940 meters of difference in length between the number one and number ten longest.

The late 1980’s and early 1990’s were a boom time for floating bridges.  Four of the top ten longest bridges were either built, renovated or renovated-then-replaced during this time.  One of these was the first on the current top ten longest list not to be in the Americas.  It was the first for Europe, but probably the country you might least expect for having a floating bridge but probably the one country where it makes the most sense.

The Bergsøysund Bridge is located about 3 hours drive southwest of Trondheim along the E39 highway, near Kristiansund, on the Norwegian coast.  The bridge connects the islands of Bergsøya and Aspøya by spanning the Bergsøysundet with its 320 meter deep water.  During my 2018 trip to Trondheim to speak at the Norwegian Public Roads Administration Technology Days, I was fortunate enough to be given a tour of this incredible bridge.

Completed in June 1992, the bridge consists of seven concrete pontoons which support a welded tubular truss superstructure.  At 2,700 feet long, it comes in 8th on the list of world’s longest floating bridges and the 2nd longest in Norway.

Just before the bridge on the Aspøya side is a park which is a great place to stop and experience the bridge.  From this side you can clearly see the horizontal curve of the bridge and the overall structure.  Painted in several hues of blue, which match the water color as it changes depth, the tubular truss rests on the seven stepping stone like pontoons as it skims across the water.  In this park is an interesting bit of yard art.  A spare tubular strut sits on some concrete supports.  This was one of the two original struts that were originally installed on the bridge, but it was replaced when a defect was found.  Nearby is an example of one of the truss tubes.

Bridge designers researched the Homer Hadley bridge, brand new at the time, and the Hood Canal bridge but ultimately ruled out the continuous pontoon design used almost exclusively in Washington State in favor of a discrete pontoon style bridge.  This was done for several reasons, but mainly for improved water passage to support native species.  By combining recent American advances in floating bridge technology with Norwegian expertise in offshore oil platforms, you have a winning recipe.

The abutments are accessed from a hatch located in the sidewalk.  From here you get a great view of the superstructure and a sense about how this thing works.  Unlike the continuous style used back home, Bergsøysund has no anchor cables.  Without cables, the bridge relies on arch action to resist lateral loads, which is why the bridge has a 4,260 foot radius built into it.  Large struts, like the one in the parking lot, attach the truss to the abutment backwalls.  This transmits the huge thrust developed by lateral loads to the shore.

To release moments developed by the arch action, each truss line has a tongue which is held in place at the abutment by three elastomeric bearings.  One bearing is placed above and below the tongue and allows the bridge to articulate up and down with the tides.  A third bearing is placed vertically between the tongue and the abutment wall and allows the bridge to articulate laterally in response to lateral loading.

A catwalk leads out from the abutment along the bottom laterals of the truss.  From here you can access the pontoons.  The pontoons are spaced about 350 feet apart.  Walking along, you’ll notice the support arrangement where the truss sits on a pontoon.  The truss attaches to each pontoon in four places.  Where the bottom laterals attach to a node, the truss is bolted to the pontoon to make a fixed connection.  At the other two nodes there is an elastomeric bearing with two bolts which acts like a pin.

Each pontoon is divided into 9 individual cells, three divisions long and three wide.  A single hatch is provided into each of the center cells.  Although I was not able to go inside, I was able to look inside.  No attempt is made to keep the pontoons dry and condensation drips from the hatch lid as it is opened.  They believe this reduces the ability for chlorides to penetrate into the pontoon structure.  It is important to remember that with a discrete pontoon setup, the truss does all of the work and the pontoons are merely there for vertical support.

In 1992, the Norwegian Government paid approximately $30 Million to build the Bergsøysund bridge.  The bridge carries two lanes and two sidewalks, so assuming a 50 foot bridge width this comes to about $220 a square foot.  Compare this to $1900 for the Lacey V. Murrow replacement bridge, which opened the year after Bergsøysund.

Bergsøysund was Norway’s first foray into the niche world of floating bridges, but it won’t be its last.  Work is already underway to add more floating bridges, some record breaking, to their inventory as part of the massive E39 Coastal Highway project.  Within the next decade it is entirely conceivable that to be on the list of the top ten longest, you’ll have to be over the kilometer mark.  Is it possible that the floating bridge won’t be so niche anymore?  We shall see.

Special thanks to Eidem Mathias Egeland and Jørn Arve Hasselø for the tour and for the invitation to come to Norway to speak at Technology Days. 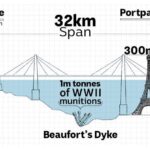 Bridging the Emerald Isles – With a Floating Bridge? 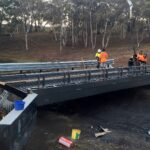