Nothing in this world strikes more fear in the hearts of both engineers and the traveling public like open grid decking on bridges.  Engineers hate it for its inherent design shortcomings and the traveling public dislike it for a variety of reasons – mainly because its noisy, slippery when wet and many find it unnerving to be able see right through it.  The collective hatred of this stuff is palpable, so why does it endure?  Why do we continue to use it?

If you consider all of the possible driving surfaces out there and then compare how much each of them weighs, you’ll quickly realize why open grid decks are still widely used.  A conventional, normal weight concrete deck weighs in around 100 pounds per square foot.  A typical 5 inch open grid deck can weigh as little as 16 pounds per square foot.  Where weight is a critical variable in bridge design, its hard to argue that open grid is often an attractive option.

Not every bridge is weight critical.  Your typical fixed span bridges, the vast majority of which use reinforced concrete decks.  Within this group are lightweight concrete decks and decks overlain with hot mix asphalt.  A solid concrete deck is obviously the most desirable solution for a variety of reasons – they are more robust, easier to maintain and help to channel run off into the right places, just to name a few.  In these cases, there really is no reason not to use a solid concrete deck here.

But for your movable bridge where weight is critical, your options are often limited.  Bascules, swings and vertical lift bridges often rely on weight balance for their operation.  This is done by the use of span balancing, mostly by use of counter weights.  Counter weighting increases the total load on a bridge but helps offset the imbalance that the bridge machinery must overcome in order to operate the span.  If your deck gets heavier you need to have room to add more counter weight.

But that isn’t the whole story.  Gross balance of the span is just part of the equation.  With more weight comes more inertia which the machinery must overcome.  But even more important is the friction increase in the system.  Friction is directly proportional to the normal force – more deck weight plus more counter weight can mean a significant increase in the normal force.  And those electric motors have to overcome that friction, which makes movable bridges much more sensitive to any weight increases.

Consider the Montlake bridge, which will have its fourth deck installed next year.  The first deck was a timber deck which included a timber floor system.  After about 20 years of service, the deck was replaced with a steel floorsystem.  Channels were used to span between these stringers and were topped with a thin, riveted grid deck whose main bearing bars were oriented parallel to traffic.  This deck remained in service until the mid to late 1990’s when the floor system and deck were removed and replaced with the current 5 inch 4-way welded deck.

The new deck began to fail after only being in service about 10 years.  Cracks began to initiate near the puddle welds where the diagonal bars connected to the rectangular grid.  Bridge maintenance tried to make repairs, but the situation only got worse.  Soon, large portions of the deck had completely failed and were covered by steel plates.  In response, bridge maintenance crews procured and installed two sets of panels (18 total) to replace the worst panels.  Since their installation, the remaining panels continue to deteriorate at an accelerated rate.  These panels will be replaced in 2021 after just over 20 years in service.

As a bascule bridge, weight of the deck is an important factor in any replacement concept.  The existing panels weigh about 18 pounds per square foot.  The 18 riveted panels installed by maintenance weigh about 25 pounds per square foot.  Doesn’t seem like a lot, but if you compute the additional moment added about the trunnion and then calculate the number of additional concrete counter weight blocks required to offset that additional deck weight, you wouldn’t have enough space in the counter weight for it all.  Besides this, the additional friction demand on the machinery, which hasn’t changed much since 1925, makes adding additional weight a problem.  More on the challenges of bridge rehabilitation in a later post.

The current welded deck has only lasted about half as long as it predecessor, whose only defect was that it was noticeably worn in the wheel lines.  Based on the evidence presented by those who have worked on this bridge in the last 20 years, it seems that the most significant factor contributing to its woeful service life were the fatigue prone details used.

By its very nature, its open.  There is no protection of the underlying portions of the substructure from the weather.  The majority of these types of bridges have steel stringers supporting the open grid deck.  Steel that is exposed to the weather will need additional attention in terms of preservation and maintenance.  Water dripping from an open deck is also frowned upon by the public.

Its noisy.  Some grid decks, such as 4-way decks marketed by LB Foster, seek to reduce noise by introducing diagonal bars to help smooth out the ride.  Still, no grid deck is ever going to be as quiet from new as a new concrete deck.

And of course, there is the major drawback feared by all engineers – fatigue.  Since its invention in the early days of steel, open grid decks have primarily been welded fabrications of flat bar and specialty shapes.  The weld details used are often fatigue prone, often with extremely limited fatigue life which can make them susceptible to frequent heavy load cycles and unpredictable cracking and failure.  Repairs are often attempted by re-welding the connections, which can often make things worse.  Introducing heat can make the steel brittle, which can lead to the problem spreading.  Zinc used in the galvanizing applied to many such decks also complicates any repairs.

And since their advent, manufacturers have done little to improve the problem.  Designers, who also deserve some of the blame, usually seek an off-the-shelf product to stick into their design and assume that fatigue has been properly addressed or turn a blind eye to it altogether.  Indeed, current bridge design codes are entirely silent on the topic of fatigue design where open grid decks are concerned.

Fatigue is a function of the number of stress cycles and the range of the stress induced during those cycles.  In typical structural design, an engineer will determine the load demands on a component and size the component’s capacity to meet or exceed the demand imposed.  In fatigue, one must look at the expected fatigue loading in order to determine the desired threshold.  Upsizing the component will often reduce the stress range and improve life.  For grid decks, this means more weight which is not desirable.  The only other way to reduce the stress range is to reduce the spacing of supports, a solution that is rarely available during a deck replacement.

But not all open grid decking need be welded.  Manufacturers such as Ohio Gratings offer heavy duty riveted grid decks suitable for HS-20 truck loads as an alternative to welded decking.  Use of rivets replaces the fatigue prone welded connections, which can improve the fatigue life of grid decks.  The down side is that riveted decks tend to be heavier than their welded counterparts.

As a direct result of the poor performance of welded decks and based on feedback from their customers, Ohio Gratings has pioneered a new style of grid deck that seeks to reduce the stress range by increasing the section modulus while keeping weight down.  This new style is the L-series deck.  Instead of using flat bar for the main bearing bars, angles are substituted and spaced similar to a conventional welded deck.  This increases the section modulus, helps reduce the stress range for fatigue and since it is riveted, reduces or eliminates fatigue prone details.

But as LeVar Burton said, you don’t need to take my word for it.  To give a side by side comparison of the performance of welded grid decks against riveted designs, take a look at the Hood Canal Bridge.  The new transition spans were designed to use a 4-way welded grid deck while the new lift spans were designed to use a riveted grid deck.  Not long after the bridge re-opened, the welded deck on the transition spans began to have issues.  Meanwhile, as of this article’s publication, no defects have been noted in the riveted design on the lift spans.

There are, of course, other options to consider when it comes time to replace your grid deck.  Extruded aluminum is one option, which has been studied for use in Florida.  Aluminum has a number of downsides which limits its use, however for new designs it could be a viable option.  Beware of dissimilar metal issues and more frequent maintenance of the driving surface.  FRP decking has been used, namely by Multnomah county, but its use has been called into question after issues were found with the relatively new Morrision Bridge in Portland.  Urethane sandwich plates are another option, however they are generally comparable to off-the-shelf riveted grid deck weights and have the same maintenance issues with the driving surface.

With access to finite element analysis programs and higher strength steels, the bridge engineer today can easily design their way out of the weight issues found with standard off-the-shelf grid deck panels.  A little more effort, certainly, but in an age where we need our transportation assets to last longer, just settling for what is readily available isn’t always the best choice.  Leaving problems due to poor design to maintenance crews to continually fix is not the answer.  They have enough on their plate.

In some cases, the only answer is an open grid deck.  And if it is, go riveted.  The rugged, dependable, longest lasting grid deck in service.  You won’t regret it. 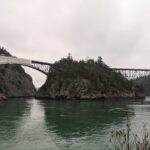 Bridge Maintenance – Now More Than Ever… 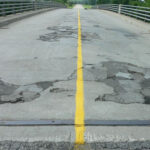