The answer is that all bridges move, but by how much is determined by their size and their stiffness.  Through structural mechanics, engineers can predict these movements.  Some movements can be controlled while others must merely be dealt with.  One of the biggest fallacies that a person can make is underestimating the power of a bridge in motion.  Bridges need to move and restricting that movement can have damaging consequences.

Bridge movements due to thermal expansion, creep and shrinkage in a global sense are generally handled by expansion joints.  In common parlance joints are devices that allow a bridge to move as needed.  They can range from the very simple open joint to the complicated modular joint and can be classified into three different categories – small, medium and large motion range joints.

Small motion range joints – these are joints with a total motion range of less than about 2 inches.  While these would include open joints, most roadway joints will be sealed in some way to prevent run off from damaging the structure bearings.  The two most common forms in use today are the compression and rapid cure silicone (RCS) seals.

Medium motion range joints – these are joints with a total motion range between 2 and 5 inches.  The most common form in use today is the strip seal.

To get an idea of the magnitude of movements we’re talking about, as a rule of thumb, for a steel bridge located in a cold climate you can expect to need about 1 inch of motion range for every 100 feet of span length.

While expansion joints may seem like a small aspect of a larger bridge project, it is one of the more important aspects.  Proper attention to design and detailing is essential to make sure that the joint will perform as desired over the life of the bridge.  From the engineer’s perspective, this is proper sizing of the gap width to make sure the bridge can move as needed.

From a maintenance and preservation stand point, other aspects come to mind.  Other types of joints have been used and may still be in service in some cases.  These include sliding plates.  While sliding plates offer more sealing than an open joint they also have a potentially dangerous down side.  Plates are often held down by bolts.  Over time, these bolts can corrode or fatigue, causing the plates to come loose under traffic.  These plates can be hazardous to traffic.

Bolt down rubber panels were often used in lieu of compression seals and were sometimes used to replace older sliding plate joints.  These are also held down by bolts and have a down side similar to sliding plates, but are less hazardous.

But often enough, some joints just wear out.  Rubber seals degrade in sunlight and often tear.  Compression seals come un-glued and get pulled out – while some are improperly installed to begin with.  Complex modular joints have many assorted bearings, springs and other hardware that can wear out.  Access is often challenging and major repair is not feasible in place and the joint must be replaced.

Expansion joint modification projects will often be specified to remove an outdated or failed joint in favor of a more modern equivalent.  One such case is the removal of a sliding plate in favor of an RCS seal.  This involves the removal of a portion of the header, cutting out the steel components, then forming and placing the silicone sealant.

Header material and preparation is highly important.  Joint headers or the leading edges at a joint are subject to some of the most severe pounding on a bridge.  The material must be strong and durable.  These projects often have limited construction windows.  Many materials used for headers are weather dependent.  Poor workmanship, improper material prep and bad weather will almost certainly guarantee you’ll be out there again before long.

But what about noise?  In an urban setting, loose sliding plates can be the bane of any maintenance group’s existence.  Joints that have headers that are even slightly off in elevation can lead to an objectionable noise for neighbors.  And where you have noise you’ll often have other problems too.  Noise often means something is getting hit harder than it should.  Dynamic effects mean these components are seeing more load than they should.  These will likely be the first components to fail.

Modular joints also have their fair share of noise issues.  These joints are just a series of strip seals, each cable of accommodating about 3 inches of movement.  Centerbeams are oriented perpendicular to traffic and separate the individual seals.  These centerbeams are supported underneath by brackets that are integral to the joint assembly.  As wheels pass over it, they make a characteristic zipper sound.  Where modular joints have replaced finger joints there are often complaints about the relative increase in noise between the two.

But the zipper noise may be a thing of the past.  New details from fabricators such as Mageba and D.S. Brown may be the solution.  Plates attached to the centerbeams of the joint allow wheels to roll noiselessly over the joints.  These have been used in a few cases recently such as the west approach to the new Evergreen Point Floating Bridge.  The down side to these plates is that they make seal replacement, a necessary maintenance activity on modular joints, much more difficult.

On large bridges with large deck widths, it may not be possible to ship the modular joint to the site in one piece.  In many cases these joints are shipped in pieces and field welded together.  These welds must be made properly to prevent fatigue issues in the future.

Modular joints today are designed with fatigue in mind and rigorous testing is required, but prior to the early 1990’s, they were not.  One notable example was on the Homer M. Hadley Bridge in Seattle.  Opened in 1989, the bridge’s four main expansion joints, including the large articulating swivel joints at the ends of the floating portion were fabricated using hollow centerbeams and were highly susceptible to fatigue issues.

Shortly after opening, the joints began to fail.  In a Herculean effort on the part of bridge maintenance, they were able to hold the failed joints together for the next 20 years until the joints were finally replaced with newer, fatigue designed and tested joints in 2009.

Construction details should be closely scrutinized with expansion joints.  Many times contractors will tack weld flat bar or other things to the joint assembly in order to use a crane or man lift to hold the joint in the correct orientation while concrete is poured.  In a few cases, these lifting aids are not removed promptly.  What happens is the bridge starts to move.  If the joint is not allowed to move by something welded across it, this can cause significant stresses to develop in the bridge.  Often the new headers will spall apart, but if not addressed or if allowed to happen with a significant temperature swing, the results can be damaging to the bridge.

While they may be a small part of any bridge project, expansion joints should not be ignored.  Bridges need to move!  But like any aspect of bridge design, proper design and detailing is essential to a long life. 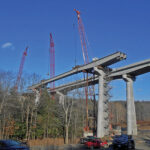 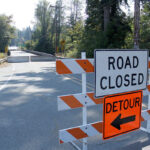 The Need for Infrastructure Spending