To the structural engineer, there are two semantic errors commonly made by the layperson that are usually ignored but I always find to be amusing.  Of course there are engineers who make these same errors, so what are we to do?  It’s a lot like misusing there, their and they’re.  All are pronounced exactly the same but each has a distinct meaning and usage.  For most of us, we understand the author’s meaning by context.  But for the English scholar – it is a hair pulling moment.

The first such semantic error is the use of the word cement when it is clear the speaker meant to say concrete.  Now for those lay people who are guilty of this, you may be saying ‘what is he on about?’  Well, simply put – cement is an ingredient of concrete.  So, the next time you go to local equipment rental place and see a device labeled as a ‘cement mixer’ you can pull out your trusty Sharpie pen and correct it.  And be sure to tell them where you learned it!

Concrete was known to the Romans but the recipe for it was lost until the 18th century.  A mixture of fine aggregate (sand) and coarse aggregate (rock), along with water and Portland cement, concrete gains its strength from the reaction of the cement with the water.  While the strength of concrete is dependent on many variables, one of the most important is the water to cement ratio.  The lower the ratio, the stronger the mix will be with all other things being equal.  An easy way to remember this is that water, a liquid, cannot be compressed and is therefore weak in compression.  So the more water you add, the weaker the mix becomes.

The second semantic error has to do with pre-stressing.  Pre-stressing is the act of introducing compression into a material to help strengthen it.  Typically concrete is pre-stressed to compensate for its inherent weakness in tension, but steel has been known to be pre-stressed.

Let’s take that piece of wood again.  If we want to pre-stress that wood, that is introduce some internal compression into it, how do we do that?  If you stress a material, the material will tend to get shorter under compression and get longer under tension.  So a pre-compressed piece of wood will be shorter than it was originally.  Now if you take a rubber band and pull it as hard as you can, then you release it, what happens?  It snaps back to its original length.  When this happens, that force you put into the rubber band to lengthen it is released violently.  It is this principal that allows pre-stressing to work.

OK, back to our piece of wood.  Let’s drill a hole through the length of the wood.  Then take a rubber band and attach it to one end.  By pulling and stretching that band through the hole, attach it to the other end.  Once you let go, you’ve now pre-stressed that wood.  The band wants to shrink back to its original shape.  But it can’t.  It is being restrained by the wood.  That tension you put into the band is now being resisted by compression in the wood.  You’ve introduced compression into the wood.

The above description is an example of post-tensioning, which is one of two forms of pre-stressing.  With post-tensioning, we are describing the method for delivering the compression into the material.  Post, meaning after, signifies that we are applying the tensile load to the strengthening element (the band) after the material (the wood) is already created or in-situ.

Back to our wood example.  If we pulled the rubber band tight before we put the wood around it, then let the rubber band go – that would be an example of pre-tensioning.  We tensioned the band before the wood was there, hence pre, which means before.

The semantic error here is that we have two pre’s.  Pre-stressing and pre-tensioning, and the two often get used interchangeably.  It is important to remember that pre-tensioning is simply one of two methods for pre-stressing a member.  It may seem minor, but there it is.

Now that we have the semantics out of the way, we can explore pre-stressing’s importance to the world of structural engineering.  When it was discovered, it was nothing short of revolutionizing.  Concrete could now span longer distances because engineers could now control the stresses in a member by using pre-stressing techniques.

In its simplest form, pre-stressing seeks to control or eliminate tension from a concrete member.  In a simple beam, loaded at mid-span, the bottom will see tension and the top will see compression.  If the load is too great, the tensile stress in the bottom will exceed the concrete’s modulus of rupture – a fancy name for the tensile strength of concrete.  If that happens, you get a crack.

In pre-stressing, we seek to prevent the bottom of the beam from seeing any tension at all, or to limit the magnitude to prevent cracking.  If the compression force is placed in a certain way, we can actually counteract the applied load that causes the tension.  In beams, pre-stressing is applied to as closely match the bending moment diagram as possible.

In pre-tensioning, which is used almost exclusively in pre-tensioned girders that are fabricated in a shop, harping is a technique that can be used to approximate the bending moment of the beam.  Hold downs are placed in two spots which deflect the tensioned strands down to the appropriate position.  After the beam is cast, you will often see a permanent upward deflection in the beam because of the internal compression.  This called camber.

In post-tensioning, strand is loaded into ducts already cast into the concrete.  The strand is then tensioned against the concrete.  To deviate the compression force, the ducts are tied to the reinforcement in a parabolic curve to closely match the bending diagram of the beam.

Like most physical systems, pre-stressing systems are not 100% efficient.  Some of the force is lost to friction or anchorage inefficiency.  Some force is lost gradually over time and must be compensated for in design.  In general, the concrete is at its highest level of pre-stress immediately after the stress is transferred to the member.  After that, it’s all downhill.

Pre-stressing is also expensive.  It requires special tools and training.  Design engineers must make more design checks than with a reinforced concrete system.  Proper attention must be paid to the details of pre-stressing.  At the forces we are talking about, mistakes can be deadly for those handling the equipment.

But the benefits are tremendous.  In a structure with no cracks, chlorides have a difficult time gaining access to the reinforcing steel.  This often lengthens the structure’s life compared to a similar reinforced structure.  Modern codes allow some amount of tension in pre-stressed concrete, often defined by how aggressive the environment is but always less than the modulus of rupture.  Some jurisdictions even stipulate zero tension – that is all parts of a component must remain in compression under full service load.

It also allows longer spans.  By controlling stresses, we can span farther with the same depth section.  Going deeper means we can go longer, which means fewer piers and reduced costs.

In short, pre-stressing addresses a number of shortcomings in conventional concrete.  The Romans may have invented it, but modern engineers perfected it.  And we continue to learn more about it and how to harness every last bit of strength.  Advances are being made in new techniques, new materials and even a better understanding of the losses we encounter.  The future is bright for pre-stressed concrete – just please don’t call it cement. 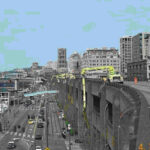 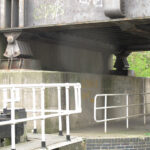