A structural engineer, in the course of his or her work, will at some point be concerned with the analysis of a structure and after that the design of a structure.  Analysis and design.  They could be a crime fighting duo or a married couple.  They go together, indelibly linked, so much so that it is difficult to have one without the other.

To understand analysis and design, we must first go back to first principles.  If structural engineering had laws, like Newton’s laws of motion, the first would state that capacity must always be greater than the demand.  A structural engineer is simply putting this law into effect multiple times during the course of his or her job, constantly computing or assessing whether a component has enough capacity to meet the demands upon it.

Analysis is simply the determination of the demand, while design determines the capacity.  Both parts can be done independently but in order to really make an assessment, the two must go hand in hand.  To be a good structural engineer, one must have an equal mastery of both sides.  Analysis can be complex or simple, but it is also important to note that complexity for complexity’s sake does not necessarily produce more accurate results, while design requires knowledge of the appropriate codes and correct interpretation and application of those provisions.  Having competency in both is the key to a promising future.

When an engineer starts an analysis, there are certain assumptions made.  These make up the design criteria.  This is a roadmap for the analysis – what loads will be designed for, what are the boundary conditions, what should be the end result?  Is the structure determinant or indeterminate?  More complicated structures are more efficiently analyzed by computers.  Various methods have been devised to analyze a structure – moment distribution, direct stiffness, finite element analysis, etc.  Finite element analysis is the preferred method these days.

Any analysis can be performed by hand, but complex structures would take a while to analyze and would become extremely tedious.  Computers help in this regard by doing many of the background calculations very quickly, allowing the engineer to view the results.  Engineering judgment and experience is important here in order to determine if the results are as expected.  Engineers will often perform simple hand calculations to help determine if the structure as entered into the program is behaving as expected.  If it isn’t, then there is a problem with the input that must be corrected.  It is important to note that analysis programs are a tool and are not a substitute for engineering judgment.

The end result of the analysis phase is the load demands on the individual components to be designed.  If this is a beam, shears and bending moments will be reported and these will be used to size the components.  Now, a certain amount of assumption is made during the analysis as to what the size of each component will be.  If the size changes appreciably after the design is completed, one may want to run the analysis again to see if the load demands changed.  In this way structural engineering is an iterative procedure.

The reason it is iterative is due to what we will call the second law of structural engineering.  This second law states that load will distribute within a structure with direct respect to the stiffness of the individual components.  In other words, the stiffer the element the more load it will be required to carry.

Stiffness is a characteristic of all structural components.  In simple terms, stiffness is the ratio of the load applied to the element to the corresponding deflection of the element.  The stiffer the element the higher the ratio and the less it deflects.  Engineers have various formulae at their disposal for calculating the actual stiffness of a member without actually needing to apply a load and see how much it deflects.  These calculations are performed by computer programs when a structure is modeled and this is how the analysis is performed.  By knowing how stiff each element is in relation to the total and to the other elements, the proportion of the load to be carried can be distributed correctly through the structure.  This is structural analysis!

Loading of a structure is the other critical part to analysis.  A bridge’s purpose is to convey things across an otherwise impassable obstacle.  The weight of these ‘things’ is the primary load or payload to be carried by the bridge.  All other loads are secondary or incidental.

In bridge engineering, the main payload is considered a live load.  A live load by definition is transient – it may be there or it may not.  Whether it is there or not, it is the most important load the bridge will carry because that load drives the bridge’s purpose for existing.

In bridge engineering, the current live loading used for vehicular bridges in the United States is referred to as HL-93.  This stands for Highway Loading that was developed for the new bridge design specifications in 1993.  HL-93 is a notional load, meaning it does not represent an actual truck or trucks but an envelope loading intended to cover all vehicles which use public highways.

HL-93 has many parts to it and a few little odd rules to remember when applying it.  In its simplest explanation, HL-93 is the combination of either an HS-20 truck and a 640 pound per linear foot distributed load or a 25 kip tandem vehicle and a 640 pound per linear foot distributed load.  Both of these are run and the one producing the maximum effect is used for design.  The truck portion of each is further increased by an impact factor while the distributed load is not.  This loading is applied per lane on a bridge.

On muti-span structures, the code prescribes that the loads shall be applied on each span and run such that the trucks are located not closer than 50 feet apart.  When this loading is used, it is only to be used for interior pier reactions and negative moment between points of contraflexure and may also be reduced by 10%.

In deck and girder bridges there are two main methods for distributing live load to the girders for design.  The first is an empirical method using distribution factors prescribed by the code.  In these cases, the per lane load, as determined using HL-93, is multiplied by the appropriate factor which converts this per lane load to a per girder load.  The second is to distribute the live load by stiffness.  To do this, total live load (applied in all lanes) is multiplied by multiple presence factors to account for the fact that a truck is unlikely to inhabit all lanes on a bridge at the same location at the same time.  The total load is then distributed based on the stiffness of the structure.

The next load to consider is dead loading, which is the weight of the structure itself.  This will include the self weight of each component, but also the added weight to the bridge that the structure must carry.  These dead loads are known as Super Imposed Dead Loads (SIDL).

Dead and live loads make up the majority of the vertical loads that a bridge must carry.  Also known as gravity loads because they are related to the weight of the items on the bridge, these are the basis for any analysis.  At a minimum, every bridge will have both dead and live loads.

And then there are lateral loads, or loads that are not directly related to gravity or the weight of components.  In general, there are two main sources for lateral loads – earthquakes and wind.  Wind loads are typically easy to quantify and are applied as pressure to the surface or sail area of the structure.  This pressure usually increases with the square of the wind velocity.  For example, the wind load at 100 miles per hour will be 4 times the wind load at 50 miles per hour.

Structural analysis results are often reported to the designer to check capacity and to size the components, but sometimes analysis is useful by itself.  Analysis can be used to compare the effect of modifications to a structure to the original analysis results.  In this way the engineer can numerically see the relative increase or decrease in load as a result of the proposed changes.  This can often be done prior to a design being committed to.

Like Batman and Robin, or Holmes and Watson, we now see how indispensable design is without analysis.  Analysis is the number crunching behind the scenes of any engineering project, the invisible partner.  But it is essential work and surprisingly, many engineers like and prefer it.  Analysis is structural engineering at its purest.

Look for more on design in the next installment of The Bridge Guy. 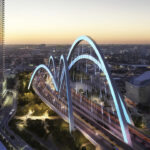 The Importance of Bridge Aesthetics 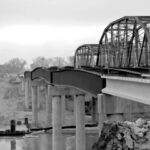 Design – the solution to all of our problems