The story of the first bridge to cross Lake Washington is a story of obstacles overcome.  And not just physical obstacles.  Like any other major civil engineering project that mankind has undertaken, there were technical barriers to overcome and public perception to change.  The result was arguably one of the most important and impactful engineering feats in Washington State history – certainly up there with the Grand Coulee Dam.

Where Grand Coulee transformed the desolate wasteland of Eastern Washington into fertile farmland, the First Lake Washington Bridge transformed the isolated city of Seattle into a booming metropolitan area.  The bridge was proof of concept that a floating bridge was not just a novelty.  Indeed, it was so popular that it spawned three sequels.

In this edition of The Bridge Guy, we’ll explore the origins of the First Lake Washington Bridge.  The politics behind it.  The technical aspects of it.  And its tremendous legacy that can still be felt to this day.

In order to do justice to a bridge’s origin story, one must first spend some time discussing the obstacle to be crossed.  Lake Washington, the second largest natural lake in the State of Washington, extends 22 miles in length from Bothell in the north to Renton in the south.  The lake presents a natural barrier between the cities of Seattle on the western shore and Bellevue on the eastern shore.  Indeed, the City of Seattle is squeezed narrowly between the freshwater of Lake Washington and the saltwater of Puget Sound – meaning accessing the city was a challenge from both the east and the west.

The lake and the surrounding topography include several interesting characteristics that play a role in the story of the first bridge crossing.  The first is Mercer Island, the nearly 13 square mile stepping stone between Seattle and Bellevue.  Its placement in the lake means a bridge crossing would only need to span about 1.5 miles instead of the 4 miles were the island not there.  Connecting Seattle with Mercer Island also made sense as a bridge across the east channel was built to connect the island with Bellevue in 1923.

But before engineers could address the lake as an obstacle, there was the Mount Baker Ridge to contend with.  At 282 feet above sea level, the ridge stands as a natural wall between Seattle and the west shore of the lake.  Spanning up and over the ridge might have lent itself well to a tall suspension bridge, however the gentle rise on the Mercer Island side did not.  Ultimately, engineers opted to tunnel through the ridge instead.

To span such a distance was not entirely without precedent.  The Golden Gate Bridge had been completed in 1937.  But a suspension bridge requires large foundations to support the main towers.  The depth of the lake and the 200 feet of very soft mud on the bottom made large foundations for a suspension bridge expensive, technically challenging to construct and utterly impractical.  It is no wonder that many thought the lake was impossible to span with a bridge.

Another feature of interest is the relative proximity of Puget Sound and Lake Union to Lake Washington.  Lake Union is smack dab in the middle of Seattle and almost perfectly centered between the Sound to the west and the larger lake to the east.  With Puget Sound and Lake Washington creating an isthmus of sorts out of Seattle, there were some who saw the potential benefits of connecting the three bodies of water together.  The rise of industry on Lake Washington made this all the more important.  Boeing had assembly plants in Renton.  There were quarries to the north.  The timber industry was still booming in the early 20th century.  And transport by water seemed lucrative.

To connect the Sound with Lake Union, workers cut the Fremont Cut out of what was then Ross Creek.  Then, the Montlake Cut was built connecting Lake Union with Lake Washington.  Together, these canals make up the Lake Washington Ship Canal.   Since the lakes are both higher than the Sound, the creation of the ship canal allowed Lake Washington to drain faster than it could refill.  The lake drained by 8.8 feet, drying up rivers and cutting off salmon migration.

To control the lake level but still allow marine passage, the Ballard Locks were built near the mouth of the canal.  The Locks and the ship canal are now the only navigable means for entry by boat onto Lake Washington, which will prove important to the history of a bridge crossing.  To this day, the U.S. Army Corps of Engineers still regulates the lake level – which is allowed to fluctuate by 2 feet throughout the year.  The lake is at its lowest level in the winter and is at its highest level in the summer.

Now, prior to the 1920’s Lake Washington was just a pretty place to visit.  But with the advent of the automobile and no feasible way to cross the big lake, those who needed to drove around it.  By 1930, many realized that driving around the lake was not a sustainable option.  George Lightfoot, a Mercer Island businessman, began lobbying for a bridge between Seattle and Mercer Island around this time.

But there still remained the technical problem to overcome – how to build such a bridge?  Many engineers said it just could not be done.  The lake was too deep.  The soils below the lake were unsuitable for bearing the tremendous loads needed for such a bridge.  And at 1.4 miles, the distance was just too great.

Enter Homer M. Hadley, former wartime engineer.  Hadley had a radical idea.  He had experience using pontoons to build bridges in Philadelphia and he drew upon hundreds of years of pontoon bridge uses from across the globe.  The way to cross such a deep and long crossing was to make use of Archimedes principle – use the buoyant force of displaced water to support load.  His solution was a floating bridge made of pontoons.

The idea would later become known as “Hadley’s Folly.”  But with persistence and support from other engineers, the idea won out.  In 1933, Hadley met with Lacey V. Murrow, then director of State Highways in Washington, who came out in full support of the idea.  Federal funds were pledged to cover 40% of the construction costs in 1937, paving the way for the project.

But like all of the future floating bridge projects, this one was not without its share of detractors.  Locals objected to the plan, with fears of the effect on their views.  Many decried the desecration of a wonderful natural asset (which by this time was treated as sewage dump and was too filthy to swim in).  Federal funding was in jeopardy unless the City of Seattle endorsed the plan to build the bridge.

On January 1, 1939, construction on the bridge commenced.  The project was built in “units” which consisted of two twin bore tunnels through the Mt. Baker ridge, fixed approach structures and the floating pontoons themselves.  The pontoons were built on the lake in a graving dock – a sort of dry dock where the concrete could be poured, allowed to cure then flooded to float the pontoons.

The pontoons were towed into position and moored in place with steel anchor cables which were connected to large anchors on the bottom.  Each pontoon was bolted to the next, forming a continuous chain of pontoons.  Transition spans (a simple truss) was used at each end to span between the floating portion of the bridge and the fixed land approach structures.  Tied arches were used to cross the 195 foot wide navigation channels on either end of the bridge.

Where the 195 foot navigation channels at either end were not sufficient, either for vertical or horizontal clearance, a 378 foot long draw span was provided near the Mercer Island side.  The draw span could provide a clear opening of 200 feet with unlimited vertical clearance.  This was important for tall vessels that needed to access the south end of the lake but would not fit under the tied arches or under the lower east channel bridge structure.

Opening to traffic on July 2, 1940, the Lake Washington Floating Bridge was an instant success.  At 45 feet wide, the bridge carried a four foot wide sidewalk on each side with four lanes for vehicles.  At 6,620 feet long, it was the world’s longest floating structure – a distinction it would have for nearly a quarter of a century.

So popular was the bridge that it was paid off in nine short years, nearly 19 years ahead of schedule.  Tolls were removed from the bridge and as a result, ferry service across the lake died out.  It was the dawn of a new era in Seattle.

In the next installment of The Bridge Guy, we’ll take a closer look at the bridge itself in more detail.  Picking up the story circa 1950, we’ll explore the next four decades in the bridge’s life.  What was it like inside the bridge?  What was it like to maintain?  What ever happened to that draw span?  Check back next week for more! 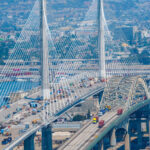 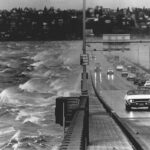