One of the more romantic aspects of bridge engineering has to be the covered bridge.  That odd little bridge complete with roof and walls, more akin to a tunnel than a bridge that most of us have seen at least once in our lives, either in a photograph, in a movie or in person.  You won’t find one on your interstate freeway, or likely on your state highway either.  These quaint gems of a past age are now only to be found in little hamlets, carrying low ADT streets with names like ‘Covered Bridge Road.’

Nowadays, we look at covered bridges as completely impractical – they limit vertical clearance, they are made from a rot prone material and they likely weren’t built to carry modern loads.  And yet their scarcity, their novelty and yes their impracticality in the modern world, are what give them their romantic appeal.  Memories of a simpler time to those who knew them.

The covered bridge, like any other man made structure, came into being out of necessity.  Before settlers arrived in North America, Native Americans were using trails that followed streams to get around.  These streams would have been crossed either at places easy to ford or using naturally occurring crossings such as stones or fallen logs.  Streams and rivers themselves would have also been used as a means to navigate thick, virgin forests.  Once settlers arrived and began to make this new land their home, these trails would have been reused.

Fording a stream was all fine and dandy for men on foot or horseback.  But as the settlers began to farm their land, livestock and crops needed to get to market.  Enter the wagon.  Wagons worked on the principle of the wheel and could be pulled by horses or cattle.  But for the wheel to work, it needed good roads.  Trails became widened into roads, still largely following the same paths that they always had.  But that left one obstacle to overcome – those streams and rivers needed to be bridged.

Early bridges would have been primitive crossings.  Log crossings known as corduroys were common.  As these crossings became more in demand they eventually gave way to more permanent timber bridges.  Many of these very early crossings were uncovered, meaning they were subject to the effects of Mother Nature – rain and sun.  Eventually the timber elements degraded.  First to go were the deck elements, then the underlying structure would rot away.

In many areas, stone or rock abutments would be used to support the timber bridges.  When the timber superstructure rotted away, the substructure would be reused.  A typical uncovered timber bridge might have a lifespan of 20 years, meaning such crossings likely had several bridge structures over the years.

Beginning in the early 19th century, timber bridges began to get walls and roofs.  By doing this, bridge builders could protect the underlying structure of the bridge – usually a truss – from the destructive elements.  By periodically maintaining the siding or roof materials, the bridge’s life could be extended for years.  In some cases over 100 years.  Can you say the same for most concrete or steel bridges?

The first known covered bridge built in the United States was the Permanent Bridge, built to span the Schuylkill River in Pennsylvania in 1805.  You could say the Permanent Bridge started a craze – about 14,000 covered bridges were built in the United States over the course of about 50 years, with most being built between 1820 and 1875.  By the mid to late 19th century, the advent of wrought and cast iron rendered covered timber bridges obsolete.

Still, the covered bridges built during the boom would endure.  With the danger of the elements removed from the equation, the only other natural predators to the covered bridge were progress and arson.  Indeed, the Permanent Bridge succumbed to arson in 1850.  When it was rebuilt it too succumbed to arson in 1875.  A temporary wooden bridge was in place until a permanent wrought iron bridge could be built in 1888.

But the Permanent Bridge was somewhat unique at three spans.  The world’s longest covered bridge is the Hartland Bridge in New Brunswick at 1,282 feet.  Most covered bridges from this period were short, single span structures over small streams or brooks.  Of these, most could accommodate just a single lane of traffic.  As roads became busier and vehicles became heavier, progress doomed many covered bridges and many were replaced with wider bridges made from more modern materials.

As of 2009, according to the National Society for the Preservation of Covered Bridges, only 814 covered bridges remain in the United States.  Between 1969 and 2015, the number of covered bridges in Canada declined from 400 to 200.  In 1900, New Brunswick alone had about 400 covered bridges.  Today only 58 remain.

Trusses were most often the structure of choice for covered bridges.  Being statically determinate, trusses are simple to analyze with the tools of the day.  However, early bridge builders lacked an understanding of the statics involved, instead relying on experience and judgment.  What you tend to see is a number of bridge builders popping up to satisfy the demand for new bridges.  And each in their own way put their mark on the world of bridge engineering.

One example is the Burr truss, the most popular type of truss for covered bridge use, patented in 1817.  A combination arch and truss, there is some controversy over which members carry the majority of the load.  Modern computer modeling seems to indicate that the truss (kingpost type) carries the load while the arch helps stabilize the bridge.  Theodore Burr himself took the opposite view.  Either way, it is widely regarded as the most stable type of covered bridge design.

Peter Paddleford built many covered bridges in New Hampshire, Vermont and Maine.  These included the Sunday River Bridge in Oxford County, Maine and the Lovejoy Bridge, Maine’s shortest, across the Ellis River near Andover.  Paddleford’s truss was basically a Long truss, with some modifications.  His design was never patented and was used by other bridge builders.

Squire Whipple, a 19th century civil engineer, was the first to publish the correct analysis of a truss in 1847.  This achievement allowed him to design more economical trusses which could span farther.  Whipple is an example of learned engineer who made the leap from simply a builder of bridges to a true pioneer of bridge engineering.  His exploits as a covered bridge engineer are largely overshadowed by his later achievements in the design of the bowstring truss.

While it is true that the Golden Gate Bridge, the Forth Bridge and the Brooklyn Bridge probably each get photographed, drawn, painted and talked about more than your local covered bridge, what a covered bridge can equal to any of these other landmark bridges is character.  Each covered bridge has a story, a sense of history.  Now so rare that soon they will become legends unto themselves.

Covered bridges have a charm that is hard to beat.  Many adults can still remember jumping out of a covered bridge’s windows into the stream below on hot summer days as a kid.  The Lovejoy Bridge, and doubtless many others, had signs reading “$3.00 fine for driving over this bridge faster than a walk.”  To give perspective, it cost $743.45 to build the bridge in 1867.  Impractical today – sure.  But still pretty cool. 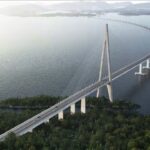 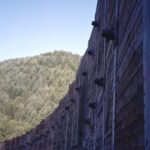 Retaining walls – because a bridge has to have a sidekick