As Francis Griggs notes in his paper American Swing Bridges 1797 to 1907, it is difficult to pinpoint the first swing bridge in the United States.  The first such bridges were built from iron and wood across the Erie canal and the Chesapeake and Ohio canal as far back at the 18th century.  After the Civil War, longer span swing bridges began to pop up across ever larger channels.

One of the oldest swing bridges in the world that is still in operation is the River Tyne Bridge (1876) in Newcastle-upon-Tyne, England.  Due to the reduction in vessel traffic on the Tyne over its life, the Tyne swing bridge only opens occasionally for pleasure yachts and on the first Wednesday of each month for a maintenance opening.  This compared to the staggering 6,000 openings at its peak in 1924.

The definition of a swing bridge is a span which pivots about a vertical axis.  Because of this, a swing span is the only one of the three main types not to defy gravity by being lifted or raised vertically.  This is why it has the name ‘swing’ because the span gets swung out of the way rather than lifted out of the way.

While the swing type isn’t as broad as the bascule type, but there are a few different sub-types to consider.  Girder types are about as common as truss types, though the girder type is often relegated to shorter spans.  Most swing bridges use balanced or equal spans and thus have no need for counterweighting like other movable bridge types since they are self-balancing.  However, unequal swing bridges are used where a balanced span layout is uneconomical or not possible.

Besides being one of the cheapest movable bridge types, swing bridges have other advantages.  When closed, a swing bridge acts just like a two span continuous bridge.  The use of continuity is unique to the swing bridge – bascules and vertical lifts represent simple span designs.  For this reason, when exceptionally large openings are required the swing bridge is the only choice.

The machinery used to move the swing span is unstressed in the closed position, which improves the life span of these components.  The pivot bearing carries all of the load, which leaves the machinery mechanism to simply open and close the span.  This is a marked contrast from fixed trunnion bascules where the trunnion itself is a load bearing element.

Unlike counterweighted movable bridges, a swing bridge tends to bounce less under live load due to the better distribution of dead load.

When opened, the wind loads on the moving span itself are identical to those in the closed position.  The center of gravity of wind loads is also unchanged when opened.  This means the stability of the bridge is not greatly affected by the movement of the span.

Vertical loads are generally reduced over those of counterweighted bridges.  Since a balanced span swing bridge is self-balancing, there is no need for heavy counterweights and the foundation size can often be reduced in good soils or at least not negatively impacted in poor soils.

Swing bridges also have a number of disadvantages over other types of movable bridges.  By virtue of their design, swing spans need to be fully opened to allow any but the smallest vessels to pass.  Depending on the bridge orientation and the vessel’s approach, the operator may have to start the opening earlier and/or wait longer to close the bridge.  These issues mean longer wait times for vehicles that use the bridge.

In general, swing bridges need more horizontal distance in order to open fully.  Before bascule bridges became de rigeur on the Chicago River, swing bridges were common.  However, the bridges were so close to one another that they needed to be opened one at a time to prevent interference.  This significantly slowed vessel traffic on the river, necessitating Federal intervention to replace swing bridges with other bridge types.

Since swing bridges pivot about a center pier, often times two channels are created.  This can be a benefit, especially on busy channels, but it can also be a nuisance or even a hazard to navigation.  As vessels increase in size, clear channel width is at a premium and pivot piers merely reduce available channel width.  Draw rests are often built perpendicular to the bridge to prevent ship impact to the superstructure.  More piers in the waterway also has a negative impact from a hydraulic and environmental standpoint.

When a swing span is open, physical barriers are needed to prevent vehicles from accidentally driving off the bridge into the water.  These are typically needed on both ends of the swing span.  Single leaf bascule bridges have a similar problem, but only on one side.

The simplest swing bridges may be operated manually using a crank.  This is done with a large pole acting as a lever arm and the operator then walks in a circle while holding the pole to open the span.  The Trevett Bridge in Maine was one of only a handful of manually operated bridges left, but it has now been converted to be mechanically operated.  Ah, progress.

Many girder type swing bridges use pony girders.  Unlike traditional deck girders where the deck sits on top of the supporting girders, pony girders protrude above deck level.  The primary purpose for using pony girders is to increase vertical clearance below the swing span when closed without negatively impacting superstructure depth.  In this case, the top flange and upper portion of the web act as a barrier in addition to supporting vertical load.

Pony trusses are also used as an alternative to pony girders or through trusses for similar reasons.  Pony trusses protrude above deck level, but are distinct from through trusses in that they have no top lateral system, sway system or portals.  In these types of bridges, the floor system is often more robust since these components must double as vertical load carrying elements as well as bracing elements.

For longer span swing bridges, through trusses are widely used.  The depth of the truss over the center pier is often deeper than at the ends to resist the larger negative moments induced by the large cantilevers in the open position and negative moment induced over the center pier in the closed position.  The deeper truss over the pivot pier is sometimes advantageously used to house the operator house.

I would be remiss if I were to say that steel was the only material used to build swing bridges.  Concrete has been used in one instance to construct a swing bridge.  This clever example is the Spokane Street Bridge in Seattle, Washington.

Believed to be the only one of its kind ever built, it can be said to hold the record for longest concrete swing span at 480 feet.  The swing spans intersect the Duwamish River at an oblique angle and therefore the swing spans need only rotate 1/8 of a revolution to clear the channel.  Built by the balanced cantilever method, this seems an entirely appropriate method given that swing spans are typically self-balancing anyway.  Each balanced cantilever swing span is built integral with the column and sits atop a 100 inch diameter steel bearing which floats in hydraulic oil.

And if you thought a concrete swing bridge was a little out there, consider Santiago Calatrava’s Samuel Beckett Bridge across the River Liffey in Dublin, Ireland.  A bridge nerd might ogle at this two span cable stayed bridge that looks very much like the Guinness Harp, but upon closer inspection one will note that this bridge also moves.  Concealed beneath the pylon is a mechanism capable of rotating the bridge 90 degrees to allow vessel to pass.

A ranked list of swing bridges by length is difficult to find, however an attempt is made below to identify several notable swing bridges.  Thanks for stopping by – next time we’ll explore the vertical lift bridge type.

The longest swing bridge in the world is the El Ferdan Bridge located near Ismailia, Egypt.  Crossing the Suez Canal, the bridge is a double leaf swing bridge and carries rail across the canal.  The pivot piers are located 1,115 feet apart on each shore of the canal.  A through truss design, each swing span is 1,050 feet long and varies in depth with an overall depth of 197 feet at the pivot pier.  Like many movable rail bridges, the bridge remains open most of the time and closes only when a train needs to pass.  The bridge was built by German consortium Krupp in 2001.

The longest swing bridge in the United States and second longest in the world is the George P. Coleman Memorial Bridge located near Yorktown, Virginia.  Crossing the York River, the bridge is a double swing bridge and is the only public crossing of the York River.  The bridge features a deck truss design with the pivot piers being located 450 feet apart, less than half the length of El Ferdan Bridge.  Designed by Parsons Brinckerhoff, the bridge was originally built in 1952 and rebuilt in 1995. 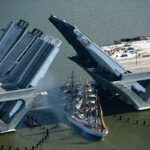 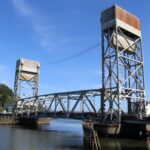