It is a generally accepted fact that for a bridge to be really, truly memorable, it must first be a beautiful one.  That is, there must be something about the structure itself, the location in which it sits or some combination of the two that is beautiful in the eye of most beholders.  Just look at some of the most photographed bridges in the world and you’ll see this fact borne out.

The Golden Gate Bridge, easily one of the most photographed bridges on Earth, is an example of a combination.  The art deco treatments of the towers and other structural elements, the unique gold color and the stunning entrance to the Oakland Bay all make the bridge a centerpiece in its own right.  The bridge is also easy to access and walk, offering views of Oakland, Berkeley and the Bay area, so it isn’t hard to see why it is such a tourist attraction.

The Sydney Harbour Bridge is an example where it is all about location.  Situated near Circular Quay in downtown Sydney, the bridge, by itself, looks like a giant clothes hanger.  Indeed, this is the affectionate nickname given to the bridge by locals.  Based on the design of the Hells Gate Bridge in New York, the design is massive and imposing, but appears strong and durable.  And yet, its presence in such a beautiful location – the brilliant blue of the harbour, the architectural delight of the Opera House located nearby – all make the bridge an ideal photographic subject.

Tower Bridge in London would be an example of a bridge that is beautiful in its own right.  Typical of the Victorian era in which it was built, the Tower Bridge Act of 1885 stipulated that the bridge needed to harmonize with its surroundings.  And what was the new bridge built near?  The Tower of London – that iconic fortress surrounded by a moat – home to the Crown Jewels of the United Kingdom for over 600 years.  In fact, the reason it is called Tower Bridge has nothing to do with the fact that the bridge has two towers incorporated into the design – it is named for the royal palace that it sits near.  While the east end is not much to snap a photo of, the bridge itself is.

But why aren’t all bridges built to look beautiful, or built in beautiful locales?  Luck of the draw, I guess.  Much of this has to do with cost, especially in today’s world.  Ornate architectural reliefs have given way to the 3/4 inch chamfer, standard formliner finishes and sacked concrete.  Architecture in bridges now must straddle that fine line between art and architecture.  See my previous posts on bridge architecture – The Importance of Bridge Aesthetics and Architectural Prints – an Engineer’s Idea of Art.

If we are to look closer to home for an example of a beautiful bridge, the Montlake Bridge in Seattle would be one fine example.  Opened in 1925, Montlake was the last of the original four crossings planned for the man-made Lake Washington Ship Canal.  Subsequent crossings were built as Seattle grew – the Aurora Avenue Bridge in the 1930’s and the Ship Canal Bridge in the 1960’s.  As its name suggests, the Montlake Bridge spans the Montlake cut – a channel cut to connect Lakes Washington and Union.  The bridge connects the Montlake neighborhood to the south with the University District to the north.

The bridge had a somewhat troubled path to existence.  Funding measures for the bridge went before voters seven total times, being successful twice, with some help from the University of Washington football team’s popularity and the popularity of a makeshift bridge that was located in the same spot.  The foundations were built with the cut in 1914 at a cost of $40,000, with the intention that someday a bridge would be located there.  The final bridge would not be ready until June 27, 1925, at a cost of just under $350,000.  Full story available here.

Due to its proximity to the University of Washington campus and in an effort to harmonize the bridge with its surroundings, the bridge was designed in the Collegiate Gothic style selected by campus architect Carl F. Gould, though Gould himself had no part in the design of the bridge.  The Collegiate Gothic style can be seen in the buildings built in the Quadrangle area (site of the famous ‘W’ planted cherry trees), Suzzallo graduate library located in Red Square and the buildings built around Drumheller Fountain near the Rainier Vista, shown below.

The Montlake Bridge has two towers, one at the northwest corner and one at the southeast corner.  Originally, each bascule leaf was controlled by an operator (tender) in each tower.  One anecdote recalls a challenge between the operators during an opening to see who could open their leaf the fastest, and consequently who could get it down the fastest, to the enormous chagrin of those who had maintain the bridge!  In the mid 1990’s, semi-automation made the northwest tower redundant and since then both leaves are controlled from the southeast tower.

The towers are true to the gothic style, being ornate and decked out in copper, stone and concrete finishes.  The end pillars, even the light fixtures and movable span railing harken back to a by gone age.

The bridge’s engineering design is somewhat unusual for a bascule.  A simple trunnion ‘Chicago’ style bascule bridge, instead of having self-contained bascule piers for containing the bridge machinery and counterweight, the approach spans are walled in with the channel facing tower walls.  This effectively means the bascule ‘piers’ are actually three sided with the embankment slope effectively being the fourth wall of the pier.  Inside this structure, the approach piers and deck soffit are visible.

To avoid a potential patent infringement lawsuit on the Strauss company’s ‘Chicago’ style design (one was brought anyway but eventually thrown out), the four trunnions were situated on concrete plinths rather than sitting on a support beam.  A simple trunnion means the pivot point of the bascule leaf is fixed and does not move, unlike in a Scherzer design.

The bridge was opened to great fanfare on June 27, 1925.  Edwin Brown, the Seattle Mayor, drove a trolley across the bridge.  City Council President Bertha K. Landes, who would defeat Brown to become the first woman mayor of Seattle, christened the bridge with an unknown effervescing liquid – this was the Prohibition era after all.  Landes’s name would further become synonymous with the world’s largest tunnel boring machine that would dig the deep bore tunnel to replace the Alaskan Way Viaduct.

The bridge has a 40 foot wide roadway with two 10 foot wide sidewalks on either side.  The decks and sidewalks were originally made from timber.  The bridge carried two sets of trolley tracks, powered by overhead power lines that are still on the bridge today.  Trolley service was eventually discontinued around 1940 in favor of trolleybuses – buses that ran on the overhead power lines.

In 1946, the bridge’s timber deck and sidewalks were removed, coinciding with the removal of the trolley tracks.  Open grid steel decking was put in its place.  This riveted deck was about 2.5 inches thick and was supported by channel sills spaced at about 15 inches.  These sills then sat on top of the bridge’s original stringer and floorbeam floor system.  The sidewalks were rebuilt using reinforced concrete.

After years of good performance, this deck became worn out and in need of replacement.  In 1999, a contract to strengthen the bridge against earthquakes and re-deck the bridge was undertaken.  The deck, sills and original stringers were removed entirely.  A new 5 inch thick welded deck and new stringers were installed.

Montlake is a focal point for the University of Washington.  Many students, staff and faculty use the bridge everyday to get to campus.  Many jog or bike across the bridge.  In the early days, bleachers lined the cut near the bridge.  The University’s rowing team would hold competitions here.  Though the bleachers are now gone and the cut is tree lined, the opening day of boating season is still celebrated and the Windermere Cup rowing competition is still held in the vicinity of the bridge.

For anyone who has used the bridge, it can get quite busy at rush hour.  The bridge is restricted from opening during rush hour, but it is still a busy bridge in the summer months.  There are plans to build a second, parallel bridge to help with congestion.  Whether that will pan out is anyone’s guess.

Enjoyed this post? Why not pick up your very own copy of the Montlake Bridge, now available as an architectural print in my shop. 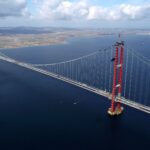 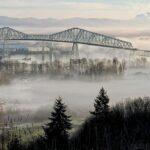 Why do we name bridges?