In the United States this past weekend, we celebrated Memorial Day.  Memorial Day is a national day of remembrance for those who gave their lives in the service of their country.  There are many ways to memorialize an individual or group – to the war dead, we dedicate a holiday weekend each year.  For some, we erect monuments.  For others, we memorialize them with buildings and bridges.  Why is that?

Buildings and bridges tend to last a lifetime, sometimes longer.  For that reason alone, we tend to see them as fitting monuments to a particular person or group, particularly a person or group associated with the structure.  But society also uses these structures.  We refer to the structure by that person’s name.  The name becomes entrenched in our consciousness – you see it on maps, hear it on the radio or read it on a plaque.  By doing this, you make society remember the namesake.  When they come to use it they read about and recognize the person.

In general, it is public infrastructure that tends to get named.  The military loves to name everything.  Bridges are often named in honor of someone, some event or some group.  Government buildings are often named after notable leaders – airports and Federal office buildings being prominent examples.  Whereas privately owned structures often take names of private corporations, publicly owned structures can recognize those who have served society.  The United States does not have an honors system like the United Kingdom to recognize public service, but perhaps memorialization is our way of honoring a certain person’s service to society?

So who gets to name these things?  Well, you and I do.  Through our representatives in government, any publicly owned structure can be named.  This is typically done through an act of the legislature or other deliberative body.  Many times such pushes are driven by public initiative.  Many bridges are named by Transportation Commissions.

And who do we name our structures after?  Many structures are named after presidents.  There are at least seven bridges in the United States that are named for George Washington, our first president.  But we also name bridges for veterans.  Most of these will be generals – Mark Clark or Douglas MacArthur for example – but others such as Pat Tillman have received recognition.  But many others have been honored in this way without serving in the military or in Federal elected office.  Directors of State Highways, governors, engineers and even civil rights activists have bridges named after them.

A memorial bridge is generally a bridge named in memory of a person or group.  In the case of a person, the naming will be posthumous.  In the case of a group, the naming will be to honor their memory after death.  In the case of the Lacey V. Murrow Memorial Bridge, Murrow had been the Director of Washington State Highways and an Air Force veteran.  He died in 1966 and the bridge was dedicated to his memory in 1967.  There are many examples of memorial bridges dedicated to a particular group, such as over 25 bridges named for various Veteran groups across the United States.

A bridge named for someone still alive omits the memorial.  The Governor Albert D. Rosellini bridge was named for the Governor of Washington who championed its construction.  Officially named in 1988, Rosellini was still alive at the time of its dedication and he died in 2011.

Many bridges change names over their lives.  Some receive multiple nicknames, affectionate or otherwise, by the people who use them.  Some bridges tend to keep their original name for life as an indelible mark, not to be displaced by some artificial namesake.

The Golden Gate Bridge, Tower Bridge and Sydney Harbour Bridge are all examples of bridges who have kept their original names long after their completion.  Even if they were named in honor of some important person, the original name is just too fitting to be discontinued.

Many bridges are named for the landmark they cross, such as Lake Pontchartrain, known locally as the Causeway, the longest continuous bridge over a body of water in the world.  But if the landmark is crossed by several such bridges, the name ceases to be a unique moniker alone.  Which bridge are we talking about?  In this case, the road name is used to discriminate or the direction (north-south, or east-west).  But for special bridges, perhaps this isn’t special enough.

So it seems that memorializing or officially changing the name of a bridge can be a good thing.  Sometimes those names get ingrained, sometimes they aren’t even that widely known.

The George Washington Memorial Bridge in Seattle opened to traffic on the 200th birthday of President George Washington, and although it completed the Pacific Highway (US 99) and crossed the Lake Washington Ship Canal, it is primarily known today by the City of Seattle street name that it carries (Aurora Avenue).  Go figure.

Even two parallel bridges, built at completely different times, with different histories and designs can essentially be lumped in as a one bridge.  Having names can help those who take care of them to differentiate, but to the general public the restriction or closure of one might as well be the complete closure of both.

So the next time you’re on your way to work or school, look out for the sign at the beginning of a notable bridge and note what it says.  You might be surprised to learn that the bridge you use every day has an official name or namesake.  Take time to remember that namesake each time you use that structure.  It is altogether fitting and proper that we should do so. 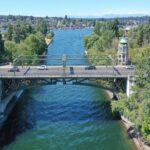 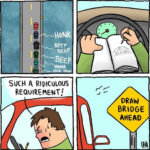 So you want to be a bridge engineer?